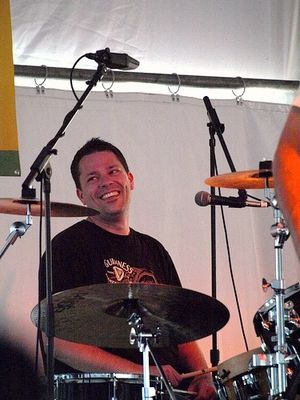 For the first 10 years, I didnt have any drums. My parents, particularly my father, played a great deal of music ranging from country to classic rock and I was immersed in it from morning (and I mean early morning) to late night. Some of it was good, some not so good. But from hearing so much of it, I was able to determine what I liked, and what I could live without.

Then, one day, in the 4th grade, my mom rolled up in a late model station wagon with an even later model set of drums. Who knows where she got them (she could tell you if you have 4 hours for the story). I was more than surprised. Looking back, they left much to be desired so far as a drum kit goes but I played them. I played them several hours every day - for several years. Throughout the next 10 years or so, I spent hours upon hours listening to and playing along to bands such as Credence Clearwater Revival and The Eagles, then more to the likes of The Who, Rush, The Black Crowes, Nirvana, Led Zeppelin and U2.

In the early summer of 1992, an acquaintance of mine, Scott McGillivray, asked me if I would be interested in playing in a get-together at his uncles house in a band that would later be dubbed "The Openers" (I think). I said sure and met up with the other musicians, including Rob Koogler. We practiced a couple of times and, when the big day came, we played a few songs in front of a crowd that might have been smaller than the number of people in the band. But, I had a great time performing and playing with Scott and Rob. A short time later, Scott, Rob and I began practicing and playing in more routine group which became a band called "Velvet Silence". Velvet Silence performed throughout my time in college and it was a pretty good band; but I graduated, got a job in another town and had to pack the drums away for a while.
In 2000, Scott gave me a call to tell me he was in a band called "Homeland" and asked if I could fill in for a gig. I was happy to oblige. When I heard that the music was going to be "Celtic Rock", I really wasnt sure what that was, but I had missed performing with Rob and Scott so it didnt really matter I was in. Later, Scott approached me about joining the band as a permanent member and I was eager to join.

And a special note of appreciation to my wife Wendy - thank you. Also, to my sons Jake and Zach if you ever choose to play an instrument, pick something that you can fit in the trunk of your car so you can take everything in with one trip. Then again, what would be the fun in that? Just play better than me and get some roadies.